Review of Outside the Gates of Science 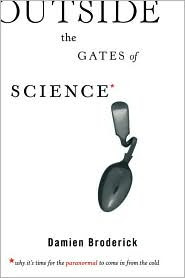 Damien Broderick is an Australian science-fiction author and critic with a PhD in the comparative semiotics of science and literature. A rare and chimeric blend of qualities which make him an engaging and sympathetic commentator on parapsychology- an enterprise which is viewed by establishment science somewhat in the same way that science fiction is viewed by the literary establishment- as a quirky and rather embarrassing enterprise driven by a desire for wish-fulfilment that anyone with respectable academic ambitions ought to have grown out of by the time they hit puberty. However Outside the Gates of Science: Why It's Time for the Paranormal to Come in from the Cold

is not a book you’ll feel you have to read surreptitiously under the bedcovers. A fast-moving foray into the fascinating (and sometimes downright bizarre) world of parapsychological research.it’s a good introduction to the controversies of the field for the non-specialist reader.

The first section of the book is a recap of some of the most often cited evidence for ESP and PK starting with the work of Joseph Banks Rhine and his card-guessing experiments at . Broderick draws a firm line between this and previous research carried out by spiritualists and psychical researchers noting that the key distinction was one of method and perhaps more importantly, cast of mind. He argues that whereas nineteenth century psychical researchers resembled historians or geographical explorers accumulating anecdotes and taking copious notes to construct narratives ’s 20th century laboratory based approach emphasised scientific standards of rigour and repeatability. In short, there are two basic types of parapsychologist- story-tellers and bean-counters. Broderick apologises for this somewhat glib summing up of the paradigm wars but his whimsical and sometimes sardonic sense of humour adds a lot to the book’s charm although the more worthy and serious minded reader may find this off-putting. (Personally speaking, I shrieked with laughter and mentally assigned appropriately-sloganed t-shirts to every parapsychologist I’ve ever met and several more whom I haven’t). Creationist sensibilities may then be shaken with the declaration of support for Evolutionary Theory phrased as “Ancient Ignorant Guess vs. Darwin, Mendel, Crick and Watson, and the Human Genome Project” (p18-19) and then it is swiftly on to the work of the Princeton Anomalies Research Team (PEAR). Emphasis is placed on Jahn and Dunne’s avoidance of what they termed as “ ‘Gee Whiz’ experiments, flashy psychic bombshells of the Uri Geller spoon-bending variety” (p21) and statistical evidence is soberly and concisely presented before moving onto an absorbing account of Targ and Puthoff’s Remote Viewing experiments and the political intrigues of psychic spies, the Stargate Project and the hunt for Saddam Hussein. There is plenty of Gee Whiz to go round here, and the author is clearly enthralled with the topic, having discussed it in depth with key players such as Ed May and Joe McMoneagle. It would appear if ‘psi’ exists that the best evidence and applications might be found in these shadowy realms, but not all the stories can be told, at least in full, and the reader is left somewhat unsatisfied at unaccredited sources and hints at hidden knowledge while Broderick himself admits that the rules of the inner circles operate “rather like the first and second rules in the movie Fight Club (‘Do not talk about Fight Club’)” (p 88).

The shadows are swiftly dispelled with what I found to be a particularly lucid exposition of quantum theories which managed to convince me that I might actually have some notion about what they might mean. No doubt this illusion will vanish the next time I talk to a real physicist, but nevertheless this is a tribute to Broderick’s calibre as a thinker and clarity as a writer as much as a testament to my own vanity. Giving short-shrift to “ the pseudo-quantum song warbled by smiling new age irrationalists” and singling out Lynne McTaggart’s book The Field (2002) as a particularly flawed example of that genre, he tackles the issue of Quantum weirdness, noting that this “looks to some people suspiciously like psychic weirdness: instantaneous nonlocal connections, reversed-time aspects to causality. The most extraordinary aspect of this discussion, for the hardnosed lay realist, is surely that it is taking place at all." (p. 189). Pointing out the similarities between the role of an observer in both ‘psi’ and quantum experimentation he argues that this "must lie at the heart of the solution to the problem of psi phenomena; and, indeed, an understanding of psi phenomena and consciousness must provide the basis for an improved understanding of Quantum Mechanics" (p. 206).

Broderick is indeed persuaded of the reality of at least some ‘psi’ phenomena- but not all, he would rather “keep gods, demons and tricksters at bay as the hypothesis of last resort." (p 272). In what might be read as a rebuke to the novel ambitions of wannabe ‘clinical parapsychologists’, he notes that “we must not allow ourselves to forget that the most powerful paranormal phenomena ever claimed have been reported by schizophrenics and other mentally disordered people” (p 274) and the difference between reports of this sort and the claims of parapsychology research is, he asserts, “the witness of their accumulating evidence and theoretical apparatus, however incomplete, by people who are not mystics or cultists” (p 275). And there’s the rub. I don’t doubt that Broderick is indeed correct in his assertion that “if telepathy, remote viewing, precognition and psychokinesis become repeatably demonstrable, they will enter, at last the realm of regular science...” (p 310). However, given that previous chapters acknowledging the capricious nature of ‘psi effects’ it might be expected that this state of affairs might be difficult, if not impossible to achieve. Furthermore, not all those individuals who have reported miracles can be easily written off as insane and whereas notions of a deity, or an afterlife or esoteric ruminations about consciousness may remain outside the gates of science, they have found well-appointed mansions of their own in departments of theology, philosophy and even anthropology across wide swathes of academia whilst academic parapsychology is still viewed with some suspicion. Perhaps we should not assume that respectability is inextricably wedded to materialism. In 1959 novelist and scientist C.P. Snow famously warned that science and arts were becoming two cultures, more recently Brockman (1995) has promoted the notion of a “third culture” to describe scientists- in particular evolutionary biologists, psychologists and neuroscientists- who may render visible “the deeper meanings in our lives” and supersede literary artists in their ability to “shape the thoughts of their generation.” So does parapsychology really need to be science and if so, why should it want to be seen as a hard, pure science?

In the last section of Outside the Gates of Science

entitled “Tomorrow’s Psi” Broderick muses on the potentials of parapsychology’s future. There may well be those that feel that the here and now of psi is puzzling and fascinating enough, but time marches on and although after all that quantum discussion and talk of retro-causation I’m not entirely sure in which direction that march will proceed, I am rather persuaded that those parapsychologists who concern themselves purely with the here-and-now run the risk of finding themselves swiftly relegated to the realms of the been-and-gone. In this final flight of fabulous speculation, Broderick, as a science fiction writer, really comes into his own with some wide-ranging thoughts about how an acknowledged reality of ‘psi’ in the workaday world might reshape human experience.

An entertaining and thought-provoking read.

McTaggart L. (2001) The Field: The Quest for the Secret Force of the Universe. : HarperCollins Publishers.

A conference on Health, Mental Health and Exceptional Human Experiences will take place at Liverpool Hope University on Monday 7th September.
The objectives of the conference are as follows:

One on belief mind and body [including the placebo effect/how the mind might be involved in the healing process; the effects of belief on the efficacy of drugs/healing/mental health; [Religious] faith and health/mental health; Exploring and understanding anomalous healing
effects - a review of distant healing effects; Hypnosis and (self) healing; exploring will or intention from a mainstream perspective; Altered states of consciousness, mental imagery and healing].

Registration for the event opened on Monday 8th June - there are different rates according to your status!

A registration form may be downloaded from our website http://hopelive.hope.ac.uk/psychology/para/HealthConference.html.
Our blogsite is located at http://exceptionalhumanexperiences.blogspot.com/.

Please email Christine at simmonc@hope.ac.uk for more details about the event.
Posted by Annalisa Ventola at 12:14 PM 2 comments: