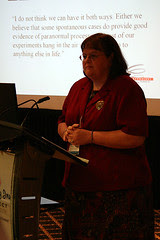 Following the earlier sessions on mediumship, the afternoon of day two of the 50th Annual Convention of the Paraspychological Association closed with a memorial panel on Ian Stevenson's work in parapsychology. Nancy L. Zingrone of the Parapsychology Foundation began with a short presentation titled Ian Stevenson on the Importance of Spontaneous Cases. In addition to his famous work on children claiming to remember previous lives, Stevenson also researched accounts of ESP experiences, apparitions, and near-death experiences. Contrary to many parapsyhologists' emphasis on experimental research, Stevenson emphasized and defended the importance of spontaneous case research throughout his career. He also discussed the strengths and weaknesses of human testimony and cautioned against citing its weaknesses as a blanket statement to dispose of cases, reminding us that we need to approach the issue of human testimony empirically. Stevenson believed that parapsychology was destined to be an incomplete science if it continued the emphasis on experimental data. 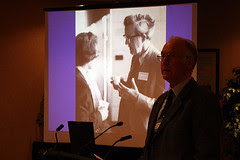 Erlendur Haraldsson, a professor of psychology at the University of Iceland, continued the discussion with a presentation titled Ian Stevenson's Reincarnation Research. Stevenson will primarily be remembered for his pioneering field investigations in this area. His first publication on the topic was published in 1960, the result of winning an essay contest in honor of William James. In that paper, Stevenson analyzed 44 cases and discussed nine hypotheses that might explain them. After that, he started active field research into cases of children who claimed to remember past lives. He visited a great number of countries to pursue such research, including India, Sri Lanka, Brazil, Alaska, and Lebanon. Stevenson gradually developed a team of interpreters and coworkers in various countries, and got some of his staff at the then Division of Parapsychology at the University of Virginia involved in this work. Stevenson's output of writings was enormous, including nine books and numerous papers. 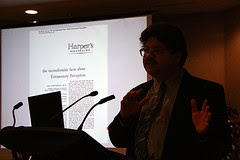 Carlos S. Alvarado of the Parapsychology Foundation looked at Ian Stevenson's Contributions to Research with Spontaneous ESP Experiences. Stevenson's first paper about parapsychology was titled "The Uncomfortable Facts about Extrasensory Perception," which was first published in Harper's Magazine in 1959. After that, he contributed more articles on ESP, including "A Review and Analysis of Paranormal Experiences Connected with the Sinking of the Titanic" in 1960, and a paper on the "Precognition of Disasters" in 1970. Stevenson also studied the spontaneous experiences of Indian school children using questionnaire responses and wrote a book called Telepathic Impressions in 1970. In his last publication on the subject of ESP, he presented a study of a single case of apparent recurrent veridical dreams. From the beginning of his career, to his death, Stevenson believed that careful investigation of cases could provide evidence for the existence of ESP. Furthermore, his approach provided a balance to the emphasis on experimental research in modern parapsychology.

John A. Palmer of the Rhine Research Center closed the memorial panel with a presentation titled Ian Stevenson on Mental Mediumship. Stevenson's contributions to this area of research centered about "drop-in" communicators and the combination lock test. Drop-in communicators are intruders who come to mediumistic sittings uninvited, and Stevenson considered them more evidential of the survival of consciousness than standard communicators. He authored or co-authored full reports of five drop-in cases in a similar style as his reincarnation cases. In the combination lock test, persons 55+ years and in good mental/physical health would generate a word or phrase that was meaningful to them but not easily guessed by their surviving relatives. Using a special code, the word or phrase would be translated into a six-number lock combination. Aspirants would set the lock before death and attempt to communicate the word or phrase to a mediums after death. At least 10 locks were registered with Stevenson, and he set two locks for himself. However, to date no one has been able to open any of the locks. Will Stevenson succeed where his predecessors have so far failed?
Posted by Annalisa Ventola at 3:38 PM