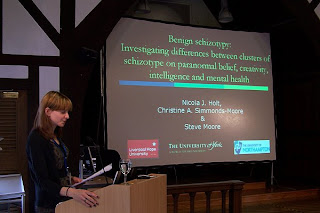 Schizotypy is a term that indicates a greater disposition toward schizophrenia. Some argue that rather than being associated with psychosis per se, schizotypy is a personality continuum upon which all people vary. In this model, schizotypy is neutral in terms of mental health, but interacts with risk (e.g. stressful events) and protective variables (e.g. supportive social networks), leading to ‘healthy’ or ‘unhealthy’ outcomes, such as creativity or psychosis. Support for this model of schizotypy comes predominantly from research that has found an association between schizotypy or anomaly-proneness and well-being, and also by the high incidence of anomalous experiences among healthy adults.


Belief in paranormal phenomena has often been associated with schizotypy, as well as poor critical thinking, suggestibility and psychopathology in the research literature. Other work has found that belief in the paranormal has many dimensions, with some aspects relating to mental health and others relating to psychopathology. A profile has emerged of the “happy schizotype,” who appears to be prone to unusual experiences in the absence of psychopathology and evaluates these experiences as pleasant. Happy schizotypes also have higher levels of mental health and well-being than other schizotypal profiles.

A study presented at the 51st Annual Convention of the Parapsychological Association by Nicola Holt, Christine Simmonds-Moore, and Steve Moore, sought to detail the personality traits that characterize happy schizotypes. 183 participants completed a battery of questionnaires including measures of schizotypy, mental health, belief in the paranormal, creativity, and intelligence. The findings of these researchers supported the notion of a happy schizotype who believes in the paranormal and has subjective paranormal experiences in addition to relatively high well-being. But, further work is required to clearly distinguish the happy schizotype from another profile of paranormal believer associated with low levels of well-being and a schizotypal profile that inludes social withdrawal, impulsive behaviour and cognitive disorganization. Holt and her collaborators also extended previous work by providing evidence for the heightened creativity of happy schizoptypes. No significant differences were found between happy schizotypes and other schizotypal types in intelligence. The researchers suggest that future work should explore what types of anomalous experiences different schizotypes are prone to, and whether these experiences might differ in type or quality.

Posted by Annalisa Ventola at 11:44 AM

"Belief in paranormal phenomena has often been associated with schizotypy, as well as poor critical thinking, suggestibility and psychopathology in the research literature. Other work has found that belief in the paranormal has many dimensions, with some aspects relating to mental health and others relating to psychopathology"
How does this theory explain the findings of the PEAR Laboratory at Princeton or the Veritas project at the University of Arizona, or the Global Consciousness Project utilizing RNG? This theory as a reductionist back fill to scientific pantheism is a load of rubbish.

I wonder if they defined clearly what falls under the term "paranormal" and how they quantified "belief" in it.

By extention, we were actually exploring the notion that there are different types of belief/believer (and not as you say, the reductionist and over simplistic notion that belief = cognitive deficits/psychopathology) as there seem to be healthy and less healthy types of anomaly-prone personality (as positive schizotypy). In fact, as part of a wider research project we actually found evidence that healthy positive schizotypy was related to significant psi scoring.

N.B. we used the Australian Sheep Goat scale to assess Belief in the Paranormal!

My experience has been that both agnostics and those who process and integrate their tunneling of reality with belief systems are equally prone. Context of the experience is also an enormous factor, that is why I thought of it as reductionist, which I still do as a causal theory. While I agree that the probability factor of psychology as a bias will skew receptivity, I have yet to see the parameters of an experiment or study on the paranormal not be equally skewed by the act, the method of measurement or the anticipation of results. One suggestion is to post the study for a more accurate reading and response. I would like to read it. I am sure others would.
Also..Have you been tested and where do either of you fit into this model of psychology as the experimenters? I think that's also important.

We are well aware of the intricacies of the 'experimenter effect' in scientific research generally, and in parapsychology specifically. I can recommend some sources if you would like to learn more.

Unfortunately, I am not able to present the study in its entirety because of copyright issues, but copies of the 2008 PA proceeding are available for order at http://parapsych.clubexpress.com/