Review of Introduction to Parapsychology 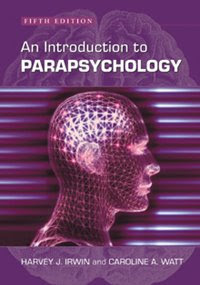 Harvey J. Irwin, an Australian psychologist at the University of New England, has written four editions of An Introduction to Parapsychology. Caroline A. Watt, of the University of Edinburgh, has joined him for an updated fifth edition. Written as a textbook, it’s 300 pages include an overview not only of extrasensory perception (ESP) and psychokinesis (PK), but relevant aspects of poltergeist, near-death, out-of-body, apparitional, and reincarnation experiences as well as unique chapters on parapsychology’s history, phenomenology, relevance to other disciplines, belief systems, and –possibly most important—parapsychology as a scientific enterprise.

All of this material produces a volume that is thick but authoritative; rigorous but approachable. Though, laypeople beware. With such an extensive volume of data, it’s not for those with short attention. For those who truly feel captivated by parapsychological material though, it is a treasure trove.

One of the most poignant aspects of the book is, perhaps, the perspective in which it is written. The authors are as transparent about the topic of parapsychological phenomena as is possible. They make no great claims to the field but do take a well-grounded and a cautious stance on its potential impact. This perspective is well illustrated by the final statement in the book:

If all of the phenomena do prove to be explicable within conventional principles of mainstream psychology surely that is something worth knowing, especially in relation to counseling practice; and if just one of the phenomena should be found to demand a revision or an expansion of contemporary psychological principles, how enriched behavioral science would be. (p. 261)

The achievement of the level of transparency in this book is not without a well positioned grudge or two regarding the aforementioned ‘mainstream psychology’ and science community. Against a subject I generally refer to as ‘science dogma’ the authors state, “some scientists reject parapsychology as a science simply because they cannot accept its empirical findings” (p. 251). An exemplary quote is then given from the prominent psychologist Donald Hebb, who in a 1951 issue of the Journal of Personality wrote “why do we not accept ESP as a psychological fact? Rhine has offered us enough evidence to have convinced us on almost any other issue…I cannot see what other basis my colleagues have for rejecting it…My own rejection of [Rhine’s] views is – in the literal sense – prejudice.”

More recently the skeptical commentator Ray Hyman admitted he could not find any methodological flaws in a series of psi experiments, yet he still refused to concede their support for the psi hypothesis in part on the ground that “it is impossible in principle to say that any particular experiment or experimental series is completely free from possible flaws” (Hyman, 1996, p.40).

One can observe that in at least a 40 year time span there has been an unfortunate persistence of such “science dogma” which is why An Introduction to Parapsychology stands as beacon to truth and impartiality in the scientific method.

Bottom line is that the 5th edition of Irwin’s, and now Watt’s, work is clearly the most balanced, accurate and current text for anyone interested in a true introduction to parapsychology.

Posted by Annalisa Ventola at 9:56 PM