A Brain Response to a Remote Stare?

“I have the feeling that we’re being watched...” is a familiar saying to most of us, and in some instances, we may turn around and find someone is watching us from afar. This experience of remote staring detection, as it is sometimes called, seems to be rather common among the general population, with surveys in the United States and Europe estimating that between 68 and 94% of people have had the feeling on at least one occasion (Braud et al., 1993; Sheldrake, 2003, Ch. 8). To better exclude the possibility that the feeling is merely due to coincidence or to subtle sensory cues, at least 15 experimental psi studies have attempted to reproduce it under carefully controlled conditions since the early 1990s. With their results combined, the studies reveal a small but statistically significant overall effect (Schmidt et al., 2004), hinting that there might be something to the “feeling of being stared at.”

In these studies, the observed effect comes as a small change in the skin’s electrical activity, which is controlled by the body’s autonomic nervo 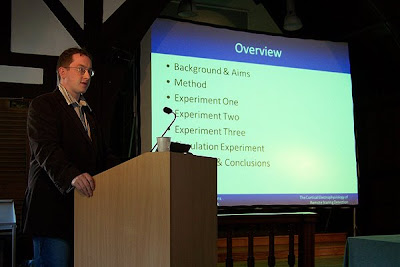 us system. It may be argued that if the nervous system can register a response to an unseen gaze, then perhaps the brain can register one, as well. To explore this possibility, Ian Baker at the University of Derby, and Paul Stevens at Bournemouth University, presented a remote staring study that included brain wave monitoring using the electroencephalograph (EEG) at the 51st Annual Convention of the Parapsychological Association in Winchester, England. In particular, Baker and Stevens (2008) examined the event-related potentials (ERPs) produced on the EEG charts during the study to see if they might serve as brain processing correlates of remote staring.

ERPs are tiny brain wave voltage changes that often reflect the brain’s electrical activity in response to sensory stimulation (Kolb & Whishaw, 1990, p. 372). For example, when a bright light is flashed in their eyes, an ERP can appear on a person’s EEG a fraction of a second later, usually in the area around the visual cortex in the occipital lobe at the brain’s rear. In addition, an ERP can occur when we are shown a picture of someone’s face, as our brain works to determine if we recognize the face or not, as well as react to its gaze. In some sense, remote staring might be seen as a form of facial or gaze processing at a distance, wherein a person’s brain somehow detects and processes the presence the gaze of a distant face. If it can be thought of in this way, then perhaps remote staring utilizes similar (if not the same) brain processes as those used in direct facial and/or gaze processing. Baker and Stevens (2008) made an initial attempt to explore the plausibility of this using ERPs.[1]

Three remote staring experiments were reported. In each one, a participant relaxed in front of a computer screen while their EEG was monitored. During part of the experiment, a facial portrait [2] was shown on the screen to evoke an ERP on the participant’s EEG; at other times, it was left blank. In addition, a starer in a distant room watched the participant at random times on another computer screen that was connected to a video camera aimed at the participant. Because of the random timing, there were occasions in which the conditions overlapped (i.e., the participant looked at the face on the screen while being remotely watched by the starer), and other times in which they did not. The results showed indications of a remote staring effect, but it only occurred when the conditions overlapped. When the participant’s ERPs generated during the overlapping condition were compared to the ERPs produced when the participant was shown the face on the screen (but not watched from afar), they were notably similar. This began to suggest that remote staring and face/gaze processing may use the same or similar brain processes.

However, the third experiment uncovered signs of a possible artifact that potentially confounded the results. When examined further in a control test, a small difference in luminance was discovered when facial portraits were being presented on the screen, which may have either affected the generation of ERPs, or provided participants with a subtle sensory cue as to the test condition. While this potentially weakens the study findings, it may have the important purpose of uncovering a procedural issue relevant to other studies in the neuroscience literature that use a similar method of ERP generation. If a similar artifact is seen in other studies, then it may affect the interpretation of many mainstream findings and draw attention to a procedural concern that must be addressed in future ERP studies. For parapsychology, further studies that control for this artifact are needed to better determine whether or not remote staring does indeed involve brain processes utilized in direct facial/gaze processing.

[1] Incidentally, Norman Don, Bruce McDonough, and Charles Warren of the of at conducted a series of ESP studies that found evidence to suggest that ERPs can sometimes serve as unconscious brain wave indicators of precognition (e.g., Don et al., 1998; Warren et al., 1992).

[2] This facial portrait was of the starer in the distant room (see text).

Sheldrake, R. (2003). The Sense of Being Stared At, and Other Aspects of the Extended Mind. : Crown Publishers.

Posted by Annalisa Ventola at 12:25 PM

"When the participant’s ERPs generated during the overlapping condition were compared to the ERPs produced when the participant was shown the face on the screen (but not watched from afar), they were notably similar. This began to suggest that remote staring and face/gaze processing may use the same or similar brain processes."

that suggests no effect. neither did I get your description of the artifact in the 3rd experiment. does one need ESP to understand that?

Thanks for your comment. In fairness to Bryan, the description of the research may be a little confusing because the research itself is complex (and summarises a great deal of work).

In essence, we found that the supposed “remote staring effect” in this series of experiments only occurred in conjunction with showing the participant visual stimuli (face or object), and did not appear to occur on its own. However, in the final study we found a subtle luminance artefact relating to the visual stimuli that could potentially explain this “remote staring effect” in more conventional terms.

I hope that this clarifies the issue. If you would like to know about this work in more depth, I urge you to read my PA paper.

It was very interesting for me to read this post. Thank you for it. I like such themes and anything that is connected to this matter. I would like to read a bit more on that blog soon.