Day Two of the 50th Annual Convention of the Parapsychological Association commenced with welcoming remarks from the PA president Rex Stanford and Program Chair of the convention, John Palmer. Then the attendees were treated to a panel titled Forgotten Pioneers of Parapsychology chaired by Carlos S. Alvarado.

Max Dessior (1867-1947), a German philosopher-psychologist, is best known for introducing the term parapsychology, but what else is known about him? Gerd H. Hövelmann presented a short biography about his life. Dessior was considered a young genius and played the violin for the Great Emporer as a child. He was only 20 years when he coined the term 'parapsychology' and published over 100 scientific publications before the age of 26, after which he became a professor of philosophy at the University of Berlin. During his career, he was hired by the Imperial Government to do a study on war psychology. He wrote books on art, aesthetics, the history of philosophy, psychology in everyday life, and on the art of holding public speeches. However, the Nazi's virtually terminated his scientific career in 1933. In 1945, Dessoir's Berlin home was hit by a presumably American bomb, destroying his library and scientific files. He died, forgotten by many, in 1947, but not before writing an autobiography discussing his views on parapsychology. He ended his life as a reluctant believer at least in telepathy.

Carlos S. Alvarado discussed the life of American physician Rufus Osgood Mason (1830-1903), who was a figure in American psychical research. Born in Sullivan, New Hampshire, Mason initially studied at a seminary, and later went to medical school. He practiced medicine in New York City, where he distinguished himself for his defense of the therapeutic use of hypnosis. His major publication in psychical research was his book Telepathy and the Subliminal Mind (1897). Mason's contributions to the field centered about case studies of alleged supernormal phenomena and popularization of psychical research through a series of articles in the 1893 issues of the New York Times. 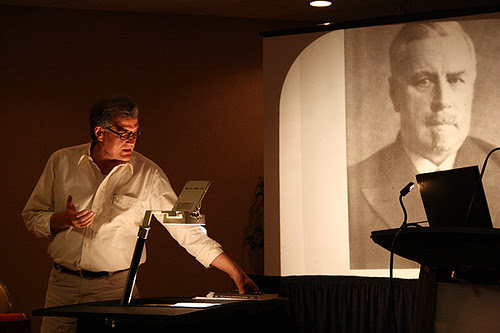 The parapsychological contributions of Emil Mattiesen (1875 - 1939), a German composer and 'metapsychologist', were presented by Eberhard Bauer. Mattiesen wrote seventeen albums of songs and ballads, but in his double career as a parapsychologist ('metapsychologist') he traveled the world learning about different languages, religions, philosophical and ideological systems. This resulted in his book Man of Next World: An Introduction into the Metapsychology of the Mystical Experience (title translated from German). The book was an ambitious attempt to give the psychology of religion a new basis by integrating paranormal phenomena. Near the end of his life, he wrote a second book called The Personal Survival of Death: An Account of the Empirical Evidence (title also translated). He died of leukaemia at the age of 64. For whatever reasons, Mattiesen's work remained totally unknown to the English speaking world. 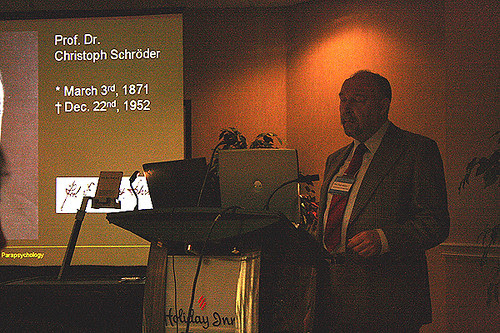 Peter Mulacz presented Christoph Schröder's (1871-1952) contributions to parapsychology. Schröder was a German zoologist who specialized in entomology, but little biographical data is known about his life. He published his own journal, Journal for Metaphysical Research (title translated from German), which ran from 1930 to 1941. Schröder was pivotal in parapsychological networking because many noted parapsychologists of his time found a forum to publish their papers in the journals he edited . It is notable that his periodicals were published even during the first few years of World War II.

The career of surgeon and neurologist Orlando Canavesio (1915 - 1957), one of the pioneers of parapsychology in Argentina, was discussed by Alejandro Parra. Canavesio focused on medical and biological aspects of psychic phenomena and founded the Argentinean Medical Association of Metapsychics. He was interested in using EEG in psychical research to study brain activity associated with ESP performance, and did so with many self-claimed psychics. Canavesio's medical dissertation was entitled Electroencephalography in Metapsychic States and it was the first dissertation in Latin America based on a parapsychological topic. He attempted to place parapsychology within government institutions and universities and was a strong defender of the incorporation of parapsychology (or metapsychics) in the chairs of psychology medicine in Argentina.

Charles Edward Stuart (1907 - 1947) was an important member of the Duke Parapsychology Lab from 1931 until his death at age 39. Nancy Zingrone presented some of the highlights of his short career. Stuart obtained a BA in mathematics with a minor in philosophy from Duke University. While an undergraduate, he volunteered to be tested for ESP and wound up being one of the lab's "star" subjects. Stuart became a formal member of the lab after being awarded a Ph.D. in the Duke program in psychology. He contributed to the debate over statistical methods being developed in psychology and parapsychology, and took a lead in the Laboratory's interaction with its critics. In addition to co-authoring an early testing manual and providing a key contribution to Rhine's book Extrasensory Perception after Sixty Years, Stuart conducted and published a wide variety of experiments exploring and expanding upon the current methodologies in the field.

An open discussion about these forgotten pioneers followed the panel presentations. Then the attendees took a coffee break, where we got to chat over a banquet of fruit and pastries and look forward to the next session of presented papers on Psychological Variables.
Posted by Annalisa Ventola at 10:39 AM

Thanks for the coverage. You provide nice, concise summaries. Wish I had the time to attend something like this, as it has long been area of interest for me.