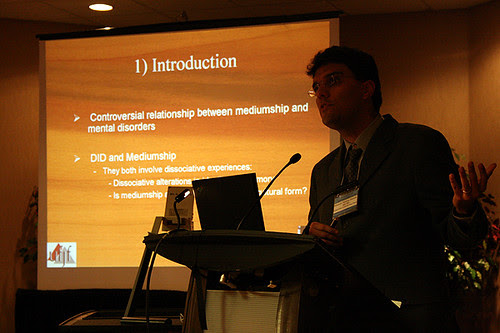 Following lunch on day two, the attendees of Parapsychological Association's 50th Annual Convention settled in for an afternoon of paper presentations on the topic of mediumship. Opening the first session titled Psychology of Mediumship, Alexander Moreira-Almeida, a Brazilian psychiatrist at the Federal University of Juiz de Fora School of Medicine, presented his latest research, Differences Between Spiritist Mediumship and Dissociative Identity Disorder(DID) Based on a Structured Interview. Both mediums and DID patients share the experience of manifesting different personalities. However, the authors hypothesized that only DID patients would exhibit dysfunctionality and other evidence of psychopathology. Almeida and his co-investigators interviewed 24 mediums selected from different Spiritist organizations in Sao Paulo, Brazil using several different established psychiatric and psychological scales. When compared to individuals with DID, mediums differed in having better social adjustment, low prevalence of mental disorders, lower use of mental health services, no use of antipsychotics, and lower histories of physical or sexual child abuse, sleepwalking, imaginary playmates, secondary features of DID, and symptoms of borderline personality. The authors concluded that in their sample of participants, mediums differed from individuals with DID in having better mental health and social adjustment, and a different clinical profile. 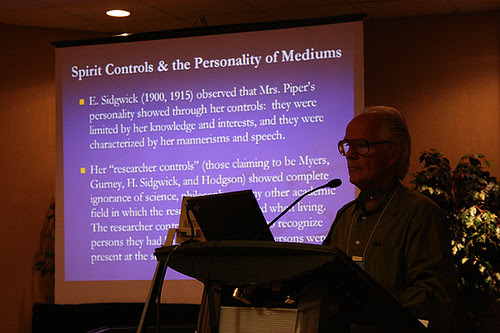 Willaim G. Roll, a psychologist at the University of West Georgia presented a paper coauthored with Bryan J. Williams, a student at the University of New Mexico, on Spirit Controls and the Brain. After reviewing relevant research on brain hemisphericity, Williams and Roll propose that spirit controls may be may be conceptualized as mental constructs that are created and personified by the
medium, and that they represent identities consistent with the medium’s left hemispheric sense of self. Comparing spirit controls with the alternate personalities of dissociative identity disorder, the authors discuss how the two are similar in several respects and suggest they may result from the same neurological processes. 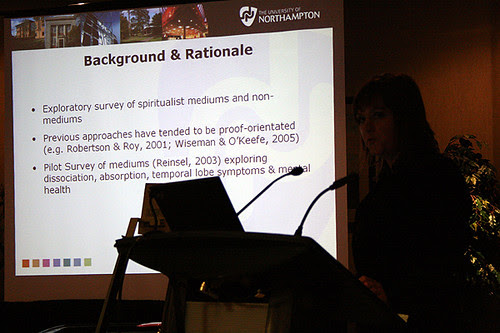 Rounding out the session on the psychology of mediumship, Elizabeth C. Roxbourgh, a graduate student at the Centre for the Study of Anomalous Psychological Processes,University of Northamptom, UK, discussed future plans for an exploratory survey on the psychology and phenomenology of mediumship. Roxbourgh plans to explore the experiences of mediums and their insights into the mediumship process using a series of questionnaires and administer them to participants in England, Scotland, and Wales. 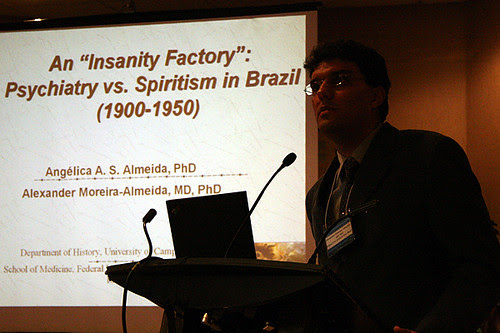 Following Roxbourgh's presentation, the convention attendees recessed for a short coffee break, then returned for session titled Mediumship in Latin America. Once again, Alexander Moreira-Almeida opened the session, but he presented a paper on behalf of his coauthor, Angélica A. S. Almeida, a historian at the University of Campinas in Brazil. The paper, titled An "Insanity Factory": Psychiatry vs. Spiritism in Brazil (1900-1950) aimed to investigate the construction of the representation of mediumship as the “Spiritist Madness” and to understand how spiritist mediumistic experiences came to be classified by psychiatrists as causes and/or manifestation of mental disorders at a time when this conflict was most severe in Brazil. Almeida concludes that the conflict between psychiatrists and mediums provided psychiatry with more social visibility and institutional power to treat mental disorders, while also giving influence to the Brazilian spiritist movement with its emphasis on the religious aspects of charity and spiritual consolation. 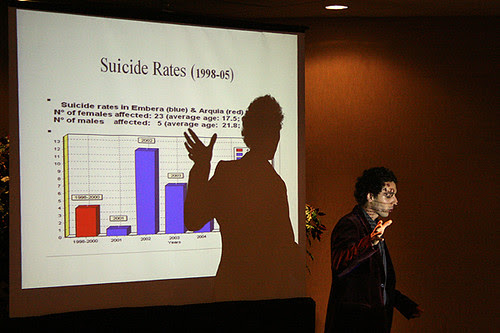 Sergio Schilling, a Chilean psychologist presented a case study titled Possession Trance and Suicide in a Colombian Tribe. Schilling visited the Embera Union, a community of 350 people located in the northwest frontier of Columbia, where 28 suicides and 26 possession trance episodes have affected young people (especially women) in the village since 2001. His paper briefly discussed his efforts to get to the root of the outbreak by testing the community for sanitary risks that might cause seizures, interviewing survivors and their parents, making a community census, and performing a genetic analysis of community members. Ruling out a number of organic, genetic, and psychological explanations for the recent wave of suicides and possession trance episodes in this small community, Schilling sought the advice and expertise of the convention attendees on how else to investigate the matter.
Posted by Annalisa Ventola at 10:21 PM

Fab reporting as always Annalisa, but if you wanted to find out if mediums are borderline nutcakes, you could have just gone bowling with me. :-)